Introduction to the 11 Plus

A Beginner’s Guide To The 11 Plus – Kent, Medway and Gravesend Edition

Chapter 1: Introduction to the 11 Plus

Background to the 11 Plus

The eleven-plus tests are a hotly debated and incredibly divisive topic in education and society. Originally known as the ‘transfer test’, they were used as a way of determining the best form of secondary education for students leaving primary school in the Tripartite System which was introduced in the 1940s.

Under the Tripartite System, all children were entitled to free education up to the age of 15, and secondary education was arranged in three different types of school: grammar school, secondary technical school and secondary modern school.

At the time, the transfer test was seen as a way of allocating the right kind of education to children according to their academic ability and future career needs. However, because there were few technical schools available when the system was introduced in 1945, the 11 plus became synonymous with fierce competition to be awarded a place at a prestigious grammar school.

The 11 plus (or 11+) is a series of tests that are taken in the final year of primary school (year 6). Its name comes from the fact that it was originally meant to decide what kind of education a child would receive after they were eleven (hence eleven plus). The majority of children who take the 11+ are actually 10 years old due to the fact that the exams are usually taken in September.

Up until the late 1960s/early 1970s, all children took the 11 plus in their final year of primary school. The introduction of the comprehensive school system, however, meant that the 11 plus was largely phased out by 1976. After this point, the 11 plus became an optional, or selective, test that grammar schools use as part of their admissions process. 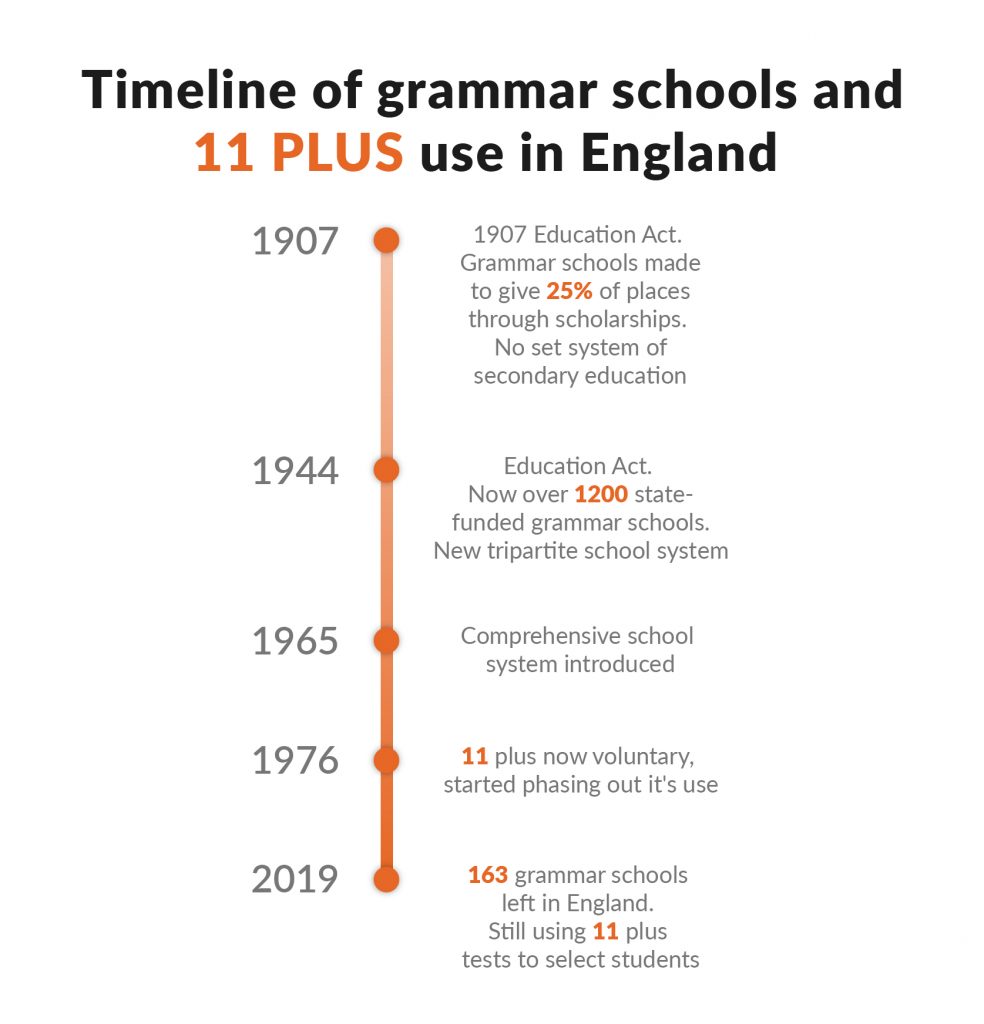 What are Grammar Schools?

It was in the 19th Century that grammar schools became more accessible as the importance of education began to be emphasised. By 1907, when the Education (Administrative Provisions) Act was passed, grammar schools that received government grants were obliged to offer 25% of places as scholarships to children who would otherwise not be able to access secondary education.

Following the 1944 Education Act, there were over 1,200 state-funded grammar schools. These schools offered a more rigorously academic education to children who passed the 11 plus exams. Taken as a whole, pupils at state grammar schools represented the most intellectually able 25% of secondary-age school children.

Grammar schools were (and continue to be) seen as highly prestigious, giving far greater opportunities than other secondary education types. The curriculum at grammar schools was more academically challenging, and up until the 1960s grammar school pupils monopolised access to universities.

Which Regions Still Have Grammar Schools and use the 11 Plus?

There are over 160 state grammar schools in England, spread across the country: 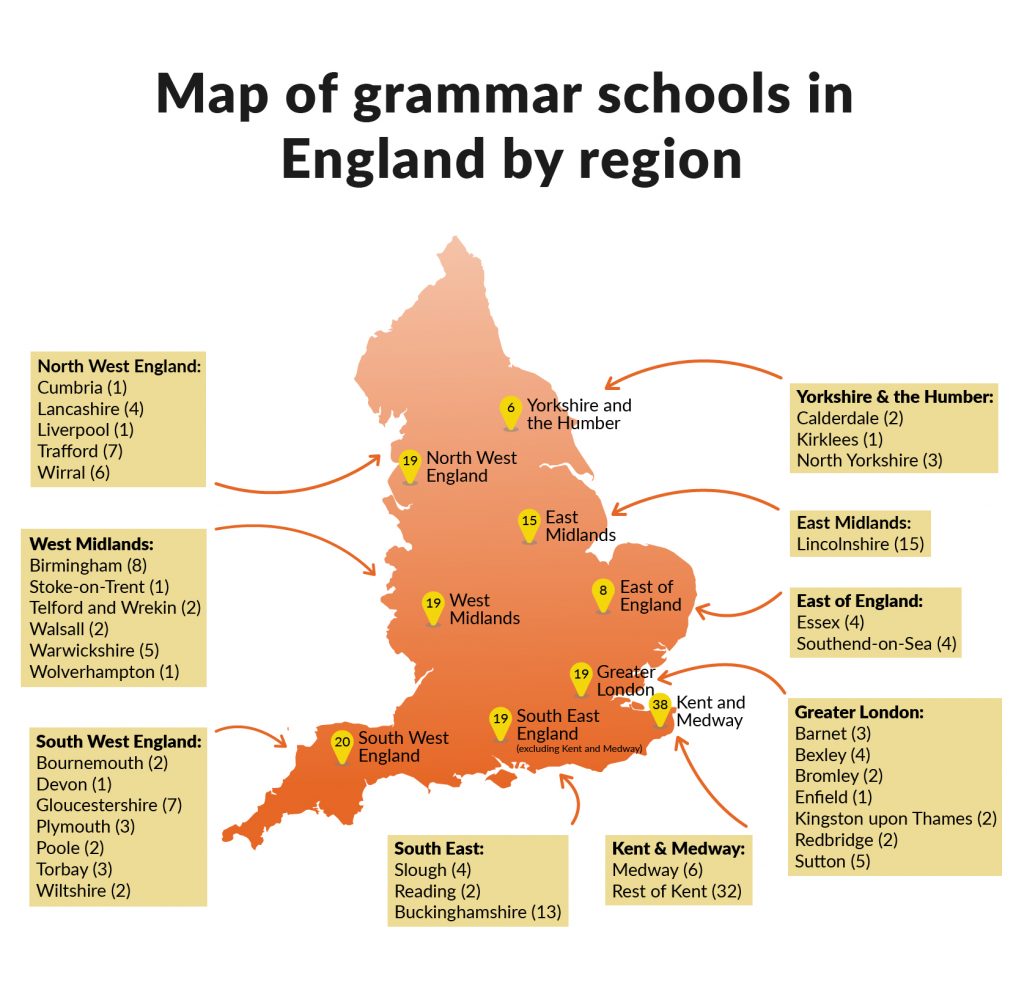 Kent has the most grammar schools out of all the regions in England. In Kent, around 28% of children of secondary school age attend a grammar school. The percentage is much lower in other counties, due to fewer grammar school places being available.

We are always happy to help with any questions or give advice regarding your tuition requirements.

Please feel free to contact us via the details below or via our online form.

Ask us a Question

Policies & Procedures
Free 11 Plus Guide
Kent 11+ Worksheets
We use cookies on our website to give you the most relevant experience by remembering your preferences and repeat visits. By clicking “Accept”, you consent to the use of ALL the cookies.
Cookie settingsACCEPT
Manage consent

This website uses cookies to improve your experience while you navigate through the website. Out of these, the cookies that are categorized as necessary are stored on your browser as they are essential for the working of basic functionalities of the website. We also use third-party cookies that help us analyze and understand how you use this website. These cookies will be stored in your browser only with your consent. You also have the option to opt-out of these cookies. But opting out of some of these cookies may affect your browsing experience.
Necessary Always Enabled
Necessary cookies are absolutely essential for the website to function properly. This category only includes cookies that ensures basic functionalities and security features of the website. These cookies do not store any personal information.
Non-necessary
Any cookies that may not be particularly necessary for the website to function and is used specifically to collect user personal data via analytics, ads, other embedded contents are termed as non-necessary cookies. It is mandatory to procure user consent prior to running these cookies on your website.
SAVE & ACCEPT